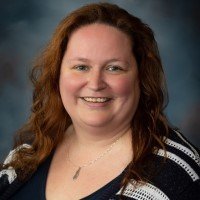 Congratulations to Taryn Brunner, RHIA – WHIMA Rising Award Recipient for 2022! Tary was recognized for this award at the WHIMA Annual Conference in Elkhart Lake! The objective of the Rising Star award is to identify and honor promising new professionals who have the potential to make significant contributions to their careers. A professional who has been credentialed within the last seven years who demonstrates contributions to local/state HIM association and exhibits significant potential for future leadership and innovation.

Tary Brunner, WHIMA 2021-2022 President, is a star amongst the stars! When WHIMA was created, it had strong, passionate HIM careerists like Tary in mind.

Tary started her HIM career back in 2010 and has not looked back since. She has blessed organizations such as UW Health, Meriter, and UW-Madison with her HIM expertise. On top of providing exceptional knowledge in her roles, she knew she wanted to do more for HIM so made the decision to join WHIMA and started volunteering.  Over the years Tary has volunteered as an Annual Conference Lead, Board of Directors for 3 years, and President-Elect, as well as having her hands in various other WHIMA groups. Tary served as the WHIMA President and Chief Delegate from 2021-2022. If her volunteer history was not enough, Tary has also received numerous WHIMA awards. In 2014, she received the Spirit of WHIMA and received the Motivator Award in 2018. While excelling through WHIMA and her career she somehow found time to complete her RHIA certification, in 2017, making sure she had no barriers to what she can accomplish for years to come.

One of the most amazing characteristics about Tary is how much heart she puts into WHIMA on and off the clock. She is the major reason that some have stayed as active volunteers. Her mind is always working to figure out the best future for WHIMA/AHIMA and truly wants everyone’s input along the way.

Tary has accomplished a lot in her time in health information and with WHIMA, but she is just getting started!

Tary – Congratulations on this well-deserved award!  We look forward to witnessing your bright future!  You are certainly a rising star!

Congratulatory emails can be sent to Tary at tbrunner3@wisc.edu.